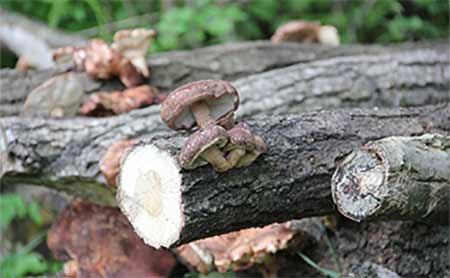 IoBoscoVivo is a bio farm company founded in 2007. Our aim is environment and human health. We cultivate medicinal mushrooms (shiitake, maitake pleurotus and others). And also we cultivate mycorrhizal plants for bioremediation practice. All our products are organic certified. Using different varieties of medicinal mushrooms, you can heal and recharge your body. Furthermore reach your full potential, and become the best version of yourself.

Shiitake is an immensely popular mushroom. It boasts numerous and varied health benefits and is a culinary delight for foodies. While the Shiitake is native to eastern Asia, it’s widely available because of easy cultivation. You can grow them at home with a log, the sun, and some starter fungus called spawn. In the wild, they grow on fallen, dead deciduous trees like beech and maple. Shiitakes look like the quintessential mushroom with a stem and umbrella-like brown cap.

Posted by Ioboscovivo on Friday, 24 February 2017

Furthermore, for at least 800 years, The Shiitake is popilar in China and has made its way into countless Asian dishes. So, It can be sauteed, steamed, made into stock, stuffed and baked, and as a result, prepared in numerous other ways. In addition shiitakes stimulate the immune system. Improves the body’s ability to fight viral and bacterial infection, including the microbes that lead to dental cavities.