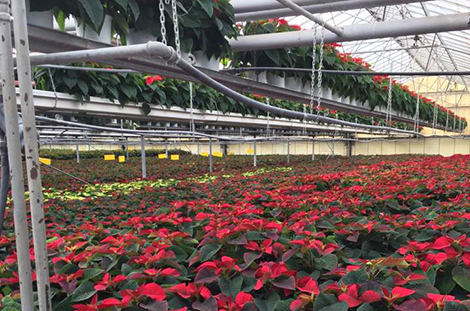 The history of the family started in 1922. With Athanasios Baxevanis, he came to Greece, as a refugee after the Minor Asia uprising.
His love of flowers, was the cure and the consolation for all that he and his family had suffered by the uprooting. His flower garden was the milestone for the town of Drama. And he himself was considered an expert in the care of flowers. So,he step by step began to process the idea of a full engagement in floriculture. Then, the idea matured and in 1960 Athanasios started to deal with Ornamental Plants exclusively.

In the beginning of the 1970, his son Gabriel took over the management of the company and continued his father’s actions. Innovative as a businessman he therefore adopted the new techniques. Furthermore, he is the first one to create a greenhouse in Drama. And in 1976 he had the first clogged with glass greenhouse in Northern Greece! In 1980, Gabriel received an award from the Ministry of Agriculture for his valuable contribution to the development of the rural economy in Greece.

History of the company.

In 1985 his son Panagiotis Baxevanis starts also his entrepreneurial activity, And now, he  is now the current owner and manager. The company expanded, and so did the requirements. As a result it became imperative to find a bigger space. In 1991 Panagiotis Baxevanis decided to have the greenhouses transferred outside the city boundaries to their current location. Now our facilities occupy a total space of 20.000m2 out of which 8.000m2 are greenhouses and the remaining 12.000m2 outdoor crops and plants.

Today the company owns private specialized trucks to transport the flowers and the plants. As a matter of fact It expands dynamically to the market. And accordingly we increased the sales network, adapting to the new conditions. Nowadays, we cultivate various ornamental plants. And export them to Holland, Belgium, Germany and to the neighboring country of Bulgaria. We supply Greece with our products. Also, we import some plants from Holland, Belgium, Germany & Italy. Baxevanis nursery uses the most modern machinery and all our greenhouses are clogged with glass.

So welcome to BAXEVANIS-ORNAMENTAL PLANTS – three Generations of Flower Cultivators.