Sanssouci Park is a large park surrounding Sanssouci Palace in Potsdam, Germany. A baroque flower garden with lawns, flower beds, hedges and trees. In the hedge quarter, there are 3,000 fruit trees. The greenhouses of the numerous nurseries contain oranges, melons, peaches and bananas. The goddesses Flora and Pomona decorate the entrance obelisk at the eastern park exit. They are here to highlight the connection of a flower, fruit and vegetable garden.

Sanssouci is more than just the palace of the Old Fritz with an expansive view over Potsdam. Sanssouci is also the world-renowned park with its distinctive, terraced grounds and majestic fountain at its center. As a result it is now a part of UNESCO’s World Heritage List. Here, for more than 250 years, the highest level of garden design has united with works by the most competent architects and sculptors of their times. 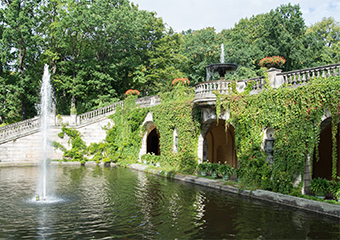 In 1743, Frederick the Great personally assumed the plans for his palace with terraces dedicated to growing wine, where he also laid out his grave site. Later, King Frederick William IV substantially expanded the garden. Between the private, intimate Sanssouci Palace and the monumental New Palace. Thus, Frederick’s French pleasure garden intertwined with a picturesque 19th century landscaped park. And furthermore enhanced with stately buildings, representative of Neoclassicism and German Romanticism. 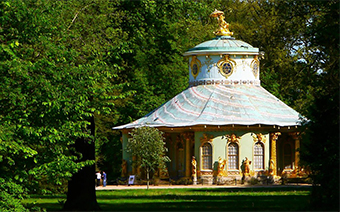 The visitors today can walk through the park’s changing styles of exquisite garden design. The aesthetics and philosophy of past residents of these palace grounds may be discovered in the exquisitely formed individual gardens. As well as in the architecture, fountains, and in over 1000 sculptures.

Sanssouci Park occupies nearly 300 hectares. Further, an east-west axis spanning more than 2 kilometers divedes the park. Visitors should plan time to see all the sights on a leisurely walk. Nearly 60 gardeners, lovingly maintain the park’s flowerbeds, hedges, trees, and expansive lawns and meadows. The splendor of the parterre at the foot of Sanssouci Palace is composed of more than 230,000 plants. Consequently their arragement is in acordance with the pleasure garden’s historical precedent.