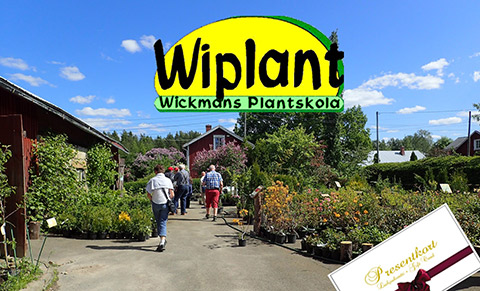 Welcome to Wickmans’ nursery. We are a plant nursery in Narpes, Ohstrobotnia, Finland. Our specialties are pot grown hedge plants, easy to plant.
Under Products you can find more of our assortment.

Wickmans Plantskola focuses on three market groups;
Wholesale to the Green sector,
Distance selling to private customers and
Direct selling during the summer from the nursery’s Garden-Center.

In 1984 the plant nursery was handed over to the son and present owner, Mr. Kjell Wickman, it’s worth to mention that the year production was about 80000-100000 cuttings. The assortment was at this time much narrower than today. Dduring the second half of the 1970s we realised that the plant materials had to be homogeneous, so we sorted the plants  and we multiplied only the best clones.

The nursery is in this respect  is a pioneer in Finland and northern Scandinavia. During the 1990s recessions it became important everywhere to be able to offer safe and homogeneous plant clones. Nowadays this is the most important criteria for the customers.

In 2002 the Finnish nursery industry started to designate “The quality producer of the year” and Wickmans’ Nursery was the first nursery in Finland to receive this award.

Also the methods and means of production has gone through several development stages  In 2009 we renovated both the machine park and production methods. As a result  the capacity of the nursery multipled and we became more competetive.