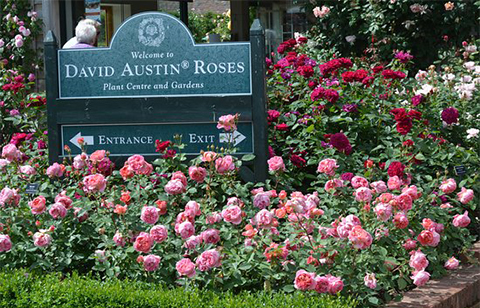 Breeders of the English David Austin Roses. We are specialist growers of old, shrub, species, climbing and modern roses.

David C. H. Austin OBE, together with his eldest son, David J. C. Austin, owns one of the world’s leading rose nurseries, David Austin Roses. It started to be active in 1969 on the Shropshire border in the United Kingdom. Alongside is world famous rose gardens. The rose nursery is home to one of the world’s largest breeding programmes for garden roses.

In fact, David C. H. Austin began breeding roses as an amateur in 1947. Since then, he has attempted to realise his vision of creating an entirely new group of roses – the English Roses. By combining the charm and fragrance of the Old Roses with the wider colour range and repeat-flowering of modern Hybrid Teas and Floribundas, he has introduced a new level of beauty to roses.

Today David has released over 200 English Roses. Many of them have won awards, both nationally and internationally, for their delicious fragrances and outstanding garden performance. Recently, English Rose ‘Graham Thomas’, received the highest accolade in the rose worl. It was voted the World’s Favourite Rose by the World Federation of Rose Societies and was inducted into the society’s ‘Rose Hall of Fame’.

Online shop – Bare root roses, containerised roses available all year round. Roses by David Austin (English Shrubs, English Climbers and Ramblers, Specimens and Standards) plus a selection of traditional Climbers, Ramblers and Shrubs. Point of sales materials and branded merchandise for link sales. Direct supply from our nursery plus a network of licensed growers.

So, welcome to David Austin Roses.