A masterpiece of the Italian Garden, Villa d’Este is a part of the UNESCO world heritage list. Due to its impressive number of fountains, nymphs, grottoes, plays of water, and music, it constitutes a much-copied model for European gardens. Such that want to resemble the mannerist and baroque styles.

The visitors consider this Italian garden within the larger –and altogether extraordinary– context of Tivoli itself. The landscape, art and history includes the important ruins of ancient villas such as the Villa Adriana. As well as a zone rich in caves and waterfalls displays the never ending battle between water and stone. Villa d’Este’s imposing constructions and the series of terraces above terraces bring to mind the hanging gardens of Babylon. As a result, people consider it, one of the wonders of the ancient world. The addition of water– including an aqueduct tunneling beneath the city — evokes the engineering skill of the Romans themselves. 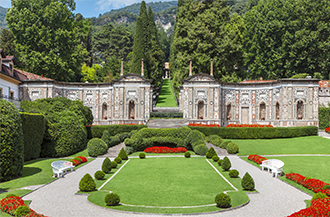 Cardinal Ippolito II d’Este, after the disappointment of a failed bid for the papacy, brought back to life here the splendor of the courts of Ferrara, Rome and Fontainebleau. And furthermore, revived the magnificence of Villa Adriana. Governor of Tivoli from 1550, he immediately nurtured the idea of realizing a garden in the hanging cliffs of the “Valle gaudente”. But, as a matter of fact it was only after 1560 that his architectural and iconographic program became clear. Being a brainchild of the painter-architect-archeologist Pirro Ligorio and realized by court architect Alberto Galvani. 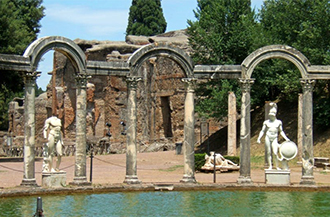 The rooms of the Palace  bear the style of the stars of the late Roman Mannerism. Such as Livio Agresti, Federico Zuccari, Durante Alberti, Girolamo Muziano, Cesare Nebbia and Antonio Tempesta. They almost completed their work at the time of the Cardinal’s death (1572).

From 1605 Cardinal Alessandro d’Este gave the go-ahead to a new progam of interventions. The idea was not only to restore and repair the vegetation and the waterworks, but also to create a new series of innovations to the layout of the garden and the decorations of the fountains.

At the outbreak of the first world war the villa became a property of the Italian State. Hence, during the 1920s, after restoration, opened to the public. Another, radical restoration was carried out immediately after the Second World War to repair the damage caused by the bombing of 1944. Due to particularly unfavorable environmental conditions, the restorations have continued practically without interruption during the past twenty years. Among these it is worth noting the recent cleaning of the Organ Fountain and also the “Birdsong”.