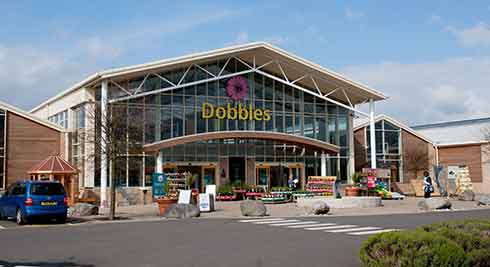 Dobbies Garden Centres is a British chain of garden centres. In fact we are the largest garden centre operator in the UK with 73 stores nationwide. Now the owner is Tesco. Today Dobbies is one of the UK’s largest Garden Centre retailers. We have stores across Scotland, England and Northern Ireland.

It all started in 1865 with James Dobbie who created a business selling seeds. He named it Dobbie & Co. The company went on to build up a customer base and started opening garden centres that fast became a go-to destination.

A new turning point in the business came in 2019 with the acquisition of 37 stores, more than doubling our national footprint. So we are UK’s leading garden centre retailer with 73 centres nationwide. Our smallest store is little dobbies Clifton and the largest is Morpeth at 18,973sqm.

Dobbies is not your average garden centre; we exist to enrich people’s lives and nurture connections between people, the community and the environment. Dobbies offer carefully considered ranges in-store and online. As well as high quality services, great restaurants and cafes as well as engaging experiences. We currently employ around 4000 Team Members.

So welcome to Dobbies Garden Centres.